On Via Ferrata you use lanyards specially designed for via ferratas! It's logical and more importantly, it's for your life! These include two carabiners with a two-finger opening system.

We don't want you to climb with two basic carabiners and static lines. This is crazy, ok and the best way to have an accident or to even die! Either you or the carabiners will brake. It already happened and it brings a bad image for the via ferrata world!

The two-finger opening system is a real comfort and even a luxury in the practice of Via Ferratas. Well, it is true that today there isn't only this type of carabiner since Salewa had to make its patent public.

In the past via ferrata lanyards had a sort of braking device (a small metal piece) which allowed one to brake on the rope and absorb the shock. This system should be banned because after several years the rope increases in volume and the brake no longer works.

As a result, today, the shock-absorbing system is made with a sort of pouch that "explodes" if a fall occurs. This makes it possible for one to know if a lanyard has experienced a fall. Okay, so it's not great from a waste perspective since the lanyard cannot be used again after a fall. Then again, falls are rare. 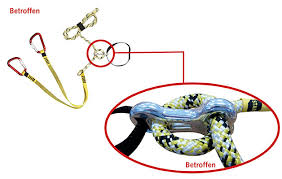 If you have this system, please don't use it anymore

This kind of lanyard should be banned. The makers did a recall and if your lanyard is not too old you can replace it free of charge!

Why not use pieces of webbing?

They are too stiff and if you fall the probability of the carabiner breaking is fairly high. If the carabiner doesn't break, then it's you that risks breaking in two. When via ferratas first started the majority of accidents were caused by the use of webbing.

We apologize if there is some advertising at the beginning, it's not our fault.